Stay at our B&B Inn in Gettysburg's Historic Downtown Gettsburg is an area that is rich in history with many points of interest including the Gettysburg Battlesfield, Gettysburg National Military Park, and Gettysburg Cemetery among many others. Staying at the Brickhouse Inn puts you in the heart of must-see area attractions for history buffs. 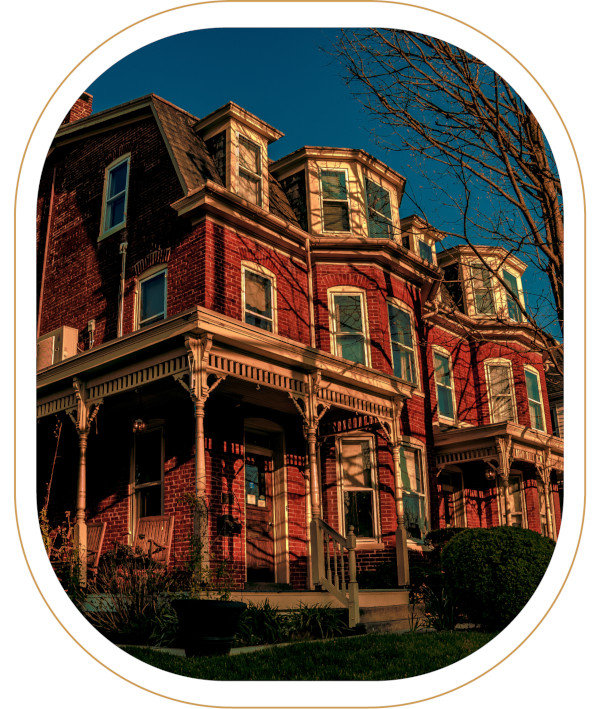 The Brickhouse Inn complete with original wood floors circa 1898 and authentic Victorian styling enraptures all who stay within her historic walls. The classical lodging has earned over 2,000+ five-star reviews on TripAdvisor along with their Certificate of Excellence and Hall of Fame Designation. There’s no better place to take in all Gettysburg has to offer than the incomparable Brickhouse Inn!

Located in the heart of Gettysburg, the Brickhouse Inn is perfectly situated within walking distance of the town’s shops and restaurants. We also offer discounted tour packages for every attraction the city has to offer from battlefield tours to food and beverage excursions. Book directly with us (through our website?) to receive the best possible rates!

We also believe antiquity doesn’t have to equal uncomfortability. Each of our elegantly decorated guest rooms comes standard with satellite TV, high-speed wireless internet, and modern air conditioning/heating. Every room features either a bay window with a view of town or a private porch with an original claw-foot tub!

Why Stay At The Brickhouse Inn?
Besides TripAdvisor’s highest stamp of approval, the Brickhouse Inn has taken home the Best B&B awarded by the Celebrate Gettysburg Magazine three years in a row while also ranking among Business Insider’s top 50 B&Bs in all of America!

Gettysburg oozes with history and the (historical designation of house?) leads the charge. During the Battle of Gettysburg, Confederate snipers took advantage of the Inn’s ideal location. You can even see bullet marks on the vintage building’s exterior. If you’re looking for a Bed & Breakfast experience you’ll never forget, book a room today!

What Are Some Features Of The Brickhouse Inn?
Cleanliness & Convenience
Rated by AAA as the “Best of Housekeeping”, the award reflects our “exceptional cleanliness and condition.” We also offer discounted tour packages for any and all excursions you might be interested in.

Stay In the arms of history
The Soldiers’ Cemetery, where President Lincoln gave his famous Gettysburg address, sits just a two-minute walk away. Culp Hill, another critical location during the battle, is even closer!

Comfort & Tranquility
The Brickhouse Inn is set within beautiful gardens, featuring a koi pond and waterfalls. Limited occupancy means you’ll feel as if you’re staying in your own home! 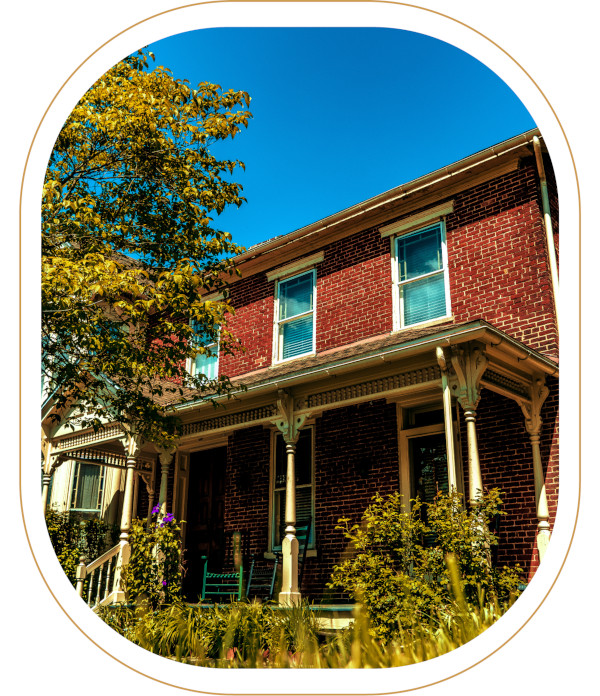 The Welty House, A Witness To Gettysburg’s Momentous History

Built in 1838, the Welty House witnessed an incredible amount of history along with an unimaginable amount of death and suffering. The notorious Welty House stands just a stone’s throw away from the very graveyard where President Abraham Lincoln delivered his pivotal Gettysburg address.

The Welty house stood in between the front lines of the Confederates and Union Armies with bullets whizzing back and forth, the future of the country in the balance. The historic property still bears numerous scars from that consequential battle. What better place to engage in our country’s paradigm-shifting history and possibly meet some of the ghosts who linger over this hallowed ground?

A Monument To America’s Beginnings
Honest Abe’s famous speech attempted to heal the country’s violent discord as the bodies of over 51,000 Confederate and Union soldiers still lay strewn across the blood-soaked battlefield.

Lincoln’s words of “Four score and seven years ago” were made to remind the country that America represented the world’s first true democracy and the worldwide ramifications of its potential failure. Today, after all these years, we’re commemorating this extraordinary property by sharing her memorable tale to all that come and stay within the walls of history.

Experience The Civil War Era First Hand
In 1863, the Welty House served as a sniper’s nest for Confederate sharpshooters as they attempted to pick off the temporarily retreating Union troops. As both sides tirelessly waged their ferocious battle, the inhabitants of the Welty House along with their neighbors holed up in the basement. There they prayed for their lives as the sounds of war raged above.

Quite frankly it’s something of a miracle that the house still stands today. If not for the goodwill of Union officers attempting to limit civilian casualties, the House would have assuredly become the target of artillery fire and been turned to rubble. Even with their compassion, Civil War artillery was infamously wayward. Perhaps the guiding hand of the thousands of dead soldiers helped spare it.

Eerie Modern Day Encounters
Despite the horrifying violence of Gettysburg taking place well over a century ago, the employees and overnight visitors of the Welty House have experienced many abnormal occurrences over the years. These ominous voices don’t come as much of a surprise. Besides sitting in the epicenter of one of the country’s most gruesome battles, bodies of Gettysburg fallen soldiers were actually buried on property!

Apparently, the voice of Charlie Toot calls out to workers by name as they go about their daily businesses. Charlie also enjoys slamming doors on windless days, occasionally giving the help near heart attacks. Once he was even seen shuffling around the Ohio room, wearing creased and pleated dress slacks with shiny brown dress shoes.

The long-time plumber of the house even reported that the hot water switch inexplicably would turn itself off. After his toolbox mysteriously moved on its own, he brought his wife with him if he had to work in the evening. Other spooky instances include the sounds of heavy dragging as if someone was moving a body. Come enjoy a night or two in the Welty House and see for yourself!

The Welty House Line Of Succession

Since the fateful days when Confederate soldiers died on the wooden floors of the Welty House and many more buried on the grounds, the property has seen just seven owners over the many years. The record of proprietors looks something like this:

Breakfast is a special part of your stay at the Brickhouse Inn, our luxury B&B in Gettysburg, PA.

Enjoy a hearty cooked breakfast served in our two dining rooms, or in the warmer months you will delight in having breakfast outside on our patios overlooking the gardens, surrounded by the sounds of waterfalls and birds.

Each day at our Pennsylvania inn the menu changes, offering fresh fruit or parfait and a savory or sweet main course. Don't forget to leave room for our breakfast desserts - our signature, home-baked shoofly pie and other mouthwatering choices, such as respberry almond tart, lemon tart, or blueberry buckle. You will leave the table thoroughly satisfied and ready to take on whatever adventure awaits you in the coming day.

We select the freshest fruit, vegetables and egges from local farmers' markets and are proud to be in the finest apple and peach growing region of the Mid-Atlantic area.

Come work for the BrickHouse Inn and US Ghost Adventures team! We're hiring tour guides, performers, and more! These are part-time roles, as we only promote for full time staff from within, unless you have substantial experience in marketing, or a killer proposal for us!

Parking is located behind the houses. 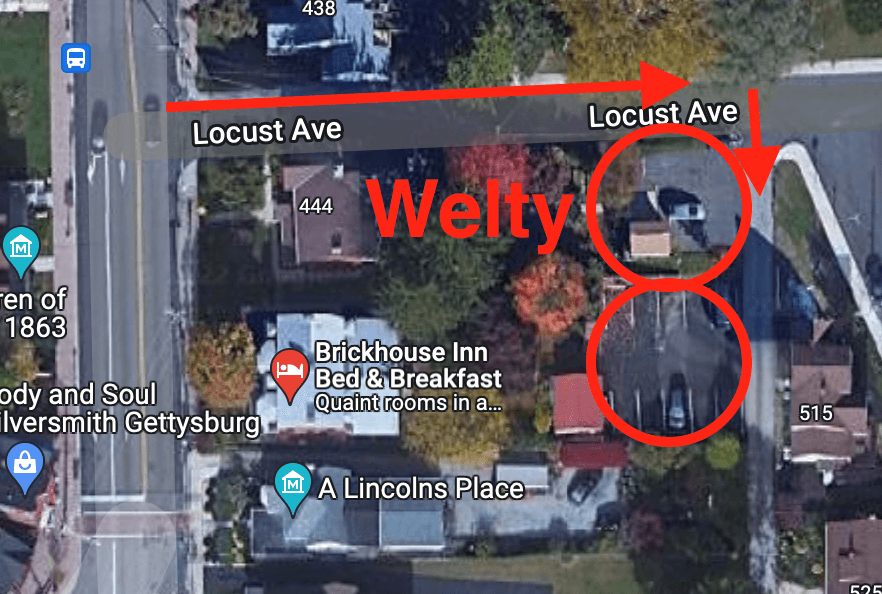