The hallowed ground of Gettysburg emanates history and there’s no better way to take in these influential events than our award winning battlefield tour. On this pilgrimage, you’ll explore the very ridge where the first shot of Gettysburg was fired, examine ground from where the Confederates launched their famous Pickett’s Charge, and absorb fascinating details that will forever change how you view one of country’s most significant battles! Our fun and informative expedition takes visitors through the pivotal events of July 1st-July 3rd, 1863. Thanks to our top-rated guides you’ll feel as if you’re in the thick of the action while learning more about these incredibly consequential campaigns than you ever could in a classroom. Join us for the most comprehensive, engaging, and enlightening Gettysburg battlefield tour on offer!

On this tour, you’ll learn the subtle details of how the Union and Confederate troops coordinated their forces in preparation for battle. You’ll walk the very ground where tens of thousands of troops bravely charged into artillery fire, hoping to make the difference in the outcome of the battle and consequently the war.

Your highly knowledgeable guide will break down the thinking of the foremost leaders of both sides and the vital decisions they made that determined the outcome of not only Gettysburg but of the entire Civil War. If you have any interest in the Battle of Gettysburg or US history in general, you have to join us on our exploration back in time!

After this tour, you’ll have an intimate understanding, not only of the tactics and thought processes of military leaders, but also a feel for the very ground through which these soldiers struggled to follow the demanding orders of their leaders. From the lowliest grunts to powers that be, you take a trip through the minds of soldiers fighting to the death. There’s no better way to take a deep dive into our country’s most weighty battle. We promise you won’t be disappointed!

To give you an idea of what you’ll see, here’s a sampling of the stops you’ll take on our three-hour voyage through history. It’s worth mentioning that throughout the tour you’ll comfortably be transported via luxury bus!

Learn The Events Of Gettysburg From Morgan Freeman

The tour starts in the top-rated Gettysburg National Military Park & Museum where the quintessential voice of Morgan Freeman will walk you through the various battles and locations that we’ll see on the tour.

There’s even a 360-degree view of the climactic battle depicting Pickett’s Charge! The museum creates the outline of the battle that we’ll fill in on our revelatory journey on the battlefields.

Take a gander from McPherson Ridge where the urgent marshaling of forces for the Battle of Gettysburg took place in the wee hours of July 1. As the troops gathered on either side, tensions were high as everyone knew a victory for the Confederacy could spell doom to the North.

To deal the crushing blow, Lee marched 75,000 strong through Virginia and into Pennsylvania. The very first shot of the historic battle of Gettysburg came from Lieutenant Marcellus Jones off this very ridge.

The North, with fewer troops, fell back to Cemetery Hill which you’ll also see lying just south of Gettysburg. Notice the topography that favored the Union army and the exact view General Lee took in which drove him to mount an assault with tantalizing victory in sight.

Your guide will illustrate the repeated assaults against the Union Army positioned around Cemetery Hill that yielded a key artillery position and bolstered General Lee’s confidence in his course of action. However, after further charges were repelled, Lee searched for a weak point in the Union’s defense.

He picked the very open field upon where you will stand for the infamous “Pickett’s Charge.” There 15,000 men rushed the fortified position of the Union army and what would become the blood-soaked field before you. It marks perhaps one of the goriest days of battle in the entire war!

Our first class Gettysburg Battlefield Tour features so many amazing stops we don’t have enough space to fit them all here! Just know that from the first shot fired to the plethora of monuments dotting the historic area and ultimately the conclusion of the the campaign, you won’t miss a single aspect of our country’s foundational event. So come join us on the battlefield. We guarantee you won’t be disappointed!

Wonder Women In The Battle of Gettysburg
11am - 1230pm 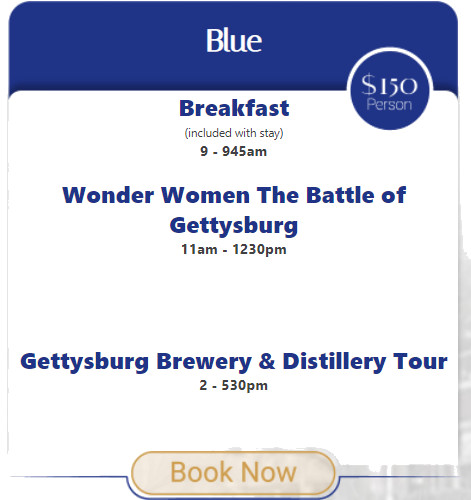